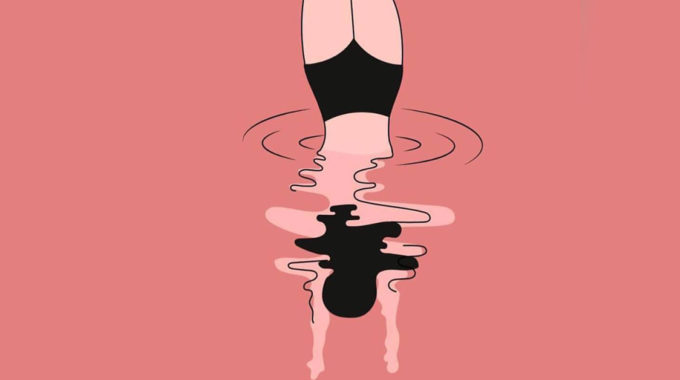 Can you taste sounds or visualize symphonies of color whenever you hear a song? If your answer to these is “yes,” you may have a wonderful condition known as synesthesia, which you share with many great artists, writers, and musicians.

Writer Vladimir Nabokov had it, and he called it “color hearing.”

By his own account, Nabokov saw each letter in different colors, despite the fact that text was printed all-black on white paper.

Interestingly, both his wife and his son shared this fascinating ability, though they each saw different palettes of color for the alphabet.

“My wife has this gift of seeing letters in color, too, but her colors are completely different,” declared the writer in an interview.

“[W]e discovered one day that my son […] sees letters in colors, too. Then we asked him to list his colors and we discovered that in one case, one letter which he sees as purple, or perhaps mauve, is pink to me and blue to my wife. This is the letter M. So the combination of pink and blue makes lilac in his case. Which is as if genes were painting in aquarelle.”

Vladimir Nabokov in an interview for the BBC in 1962

Many other cultural personalities besides Nabokov have reported having a form of synesthesia, including painter Wassily Kandinsky, inventor Nikola Tesla, and composer Franz Liszt.

The word “synesthesia” is derived from Greek and literally means “concomitant sensations.” People with this condition — often referred to as “synesthetes” — experience a unique blending of two senses or perceptions.

This may be sounds automatically coupled with tastes, sounds with colors, or written letters with colors.

Researchers explain that this is difficult to deduce. Since there are five traditionally accepted senses — sight, hearing, taste, touch, and smell — and synesthesia is characterized by the crossover of two senses or perceptions, there could be numerous possible combinations.

The most commonly reported types of synesthesia, however, are color-graphemic, in which letters, numbers, or geometric shapes are linked to colors or patterns, and color-auditory synesthesia, in which various sounds immediately recall specific colors, shapes, or textures.

One synesthete who spoke to Medical News Today gave us a highly impressive description of her experience of color-auditory synesthesia.

“As far back as I can remember,” she told MNT, “I would experience music on the radio as a colorful landscape of moving shapes in my head, whereas speech would invoke mental images of a single moving line of color — a bit like a floating stroke of spray paint, hanging in the air.”

“[The sound produced by] each [musical] instrument has its own color… Flutes are sky-blue whereas an oboe is more indigo… The sound of a piano seems to me like iridescent white cubes moving around in clusters as though they’re floating in water.”

Like a number of other synesthetes, however, she also has another form of synesthesia: the color-graphemic kind, which causes her to experience numbers and letters in particular colors. In her case, however, it comes with some unique twists.

“For instance,” she said, “there are no purple numbers…and yet both 7 and 8 are blue…(Although 7 is sky-blue and 8 is indigo),” adding that, for her, “Words are usually the color of their first letter.”

“This isn’t always the case though,” she notes. “Friday for instance is brown, when F is green and Thursday is maroon, when T is indigo…I see the days of the week as though they’re on a ladder, with Saturday and Sunday as the top two steps — I’ve heard that some others see this as well!”

How common is synesthesia?

It is difficult to say how many people actually experience synesthesia, mainly because there is very little research that has aimed to address this question. Moreover, some people may not know that what they experience is unusual, and so they may not speak about it.

The synesthete that MNT interviewed explained to us that she did not, in fact, realize for a long time that her condition was unique, having assumed that most people experience something similar.

“I always knew that my specific coloring of letters and numbers was personal to me, but presumed everyone else had a similar code of their own,” she told us.

“And then at primary school, I realized not everyone saw colors and imagery in this way…but,” she went on, “it was only in university that I realized that it was a real minority of us who had synesthesia.”

Researchers at Boston University in Massachusetts have suggested that around “1 in every 100,000 people to 1 in every 5,000 people” have one or more forms of synesthesia.

A study that was conducted in 2006 by several researchers based at the University of Sussex in the United Kingdom indicated that color-graphemic synesthesia may be experienced by just over 1 percent of individuals.

The study authors also concluded that this kind of perception may nevertheless be more common than we would have thought, saying that “the prevalence of synesthesia [seemed to be] 88 times higher than previously assumed.”

From a specialist point of view, synesthesia is defined as a neurological condition, as it changes a person’s perception of, and interaction with, certain aspects of the surrounding world.

As some specialists will explain, the main characteristic of this condition — the association of two complementary sensations or perceptions — “arise[s] spontaneously during [early] development.”

These associations are also constant for synesthetes. That is, if the letter “A” recalls the color blue, for example, this perception will never change.

Some people with color-graphemic synesthesia report that a letter or number may evoke a color whose name it sounds like. So, “A” may trigger a vision of gray, and the number “5” may evoke “white.”

In fact, Nabokov — who was fluent in several languages — reported experiencing the same letters in different colors and textures, depending on the language that he was using at any one time.

“The long ‘A’ of the English alphabet has for me the tint of weathered wood, but a French ‘A’ evokes polished ebony,” he explained in his interview for the BBC.

Is it down to genetics or to early learning?

So, what causes these intriguing perception cross-overs? Researchers do not always agree, and in fact, synesthesia may quite possibly arise via different mechanisms in different people.

Some studies have suggested that the condition is genetically inherited, which may explain why Nabokov’s son had color-graphemic synesthesia, like both of his parents.

However, research conducted in identical twins in which one sibling of the pair has synesthesia while the other does not suggests that other factors may also be at play.

A paper that was published in the journal Nature Scientific Reports in 2014 by researchers from the University of Brighton in the U.K. proposes that early learning may be key in the development and continuity of synesthetic experiences.

“[Color-graphemic synesthesia],” the authors write, “appears to emerge in early school years, where first major pressures to use graphemes [symbols and codes such as letters and numbers] are encountered, and then becomes cemented in later years.”

“In fact,” they say, “for certain abstract inducers, such as graphemes, it is implausible that humans are born with synesthetic associations to these stimuli. Hence, learning must be involved in the development of at least some forms of synesthesia.”

How does it affect a person’s life?

Synesthesia — through the unexpected associations that it produces in a person’s brain — can be a great source of inspiration, and perhaps this is part of the reason why so much art, and so many inventions, have come from synesthetes.

The one who spoke to MNT confirmed that her synesthetic experiences have contributed to shaping her work and interests.

One of her synesthesia forms is characterized by perceiving music in colors — and this has inspired her to make her own music.

“I like to write music,” she told us, “and because I see the notes visually, I think that helps create a nice aural balance as well — it’s like another mental display that’s available when trying to mix [sounds].”

Synesthesia can also be pragmatically helpful, as the associations it triggers can easily be used as mnemonic devices, allowing synesthetes to recall certain types of information more easily.

Our interviewee said that this happens to her, as well. “I think the colors help me remember people’s names,” she explained, “because if I’ve forgotten [the name of a person] called Mark for instance, I’ll still have a sense that they’re a ‘red person,’ which means I’ll know that their name must start with the red letter, which is M.”

“I can also beat anyone at word searches, because although I’d say the letters do look visually black, the mental imposition of color is significant enough to make certain letters stand out.”

The associations formed in the minds of synesthetes are also valuable to researchers investigating how our brains code and process certain types of information, such as language.

One study, for instance, worked with a cohort of color-graphemic synesthetes to look into natural language processing.

In the future, some researchers argue, studying the mechanisms of synesthesia in more detail could provide crucial input for cognitive science research and allow us all to gain a better understanding of how our brains guide us and help us navigate the world.

How the brain creates the subjective experience of time

Everyone has felt, at one point or another, that time does indeed "fly" when we're…

There are no upcoming events at this time.

Copyright 2018 - All Rights Reserved
In America, about one in three adults struggles to get enough sleep, which is linked to overeating, obesity, diabetes, heart disease, and problems on the job. Our sleep cycles are tied to an internal body clock (circadian rhythm)—and now scientists have discovered not only a gene that controls our normal daily biological rhythm, but also the mechanism by which that gene operates. Because of the importance of sleep to health and well-being, these discoveries are expected to have vast implications for human health and well-being. Read more...
Holler Box
The Sedasys – It can almost be called a robot anaesthesiologist, the Sedasys is a computer that is attached to the IV and gives the patient the correct amount of sedatives and monitor’s patients’ vitals. It also includes an earpiece that wakes up the patient at the correct time if necessary. This machine helps doctors to perform light to moderate sedations without the support of an anaesthesiologist. Read more...
Holler Box
Scientists are 3D printing human body parts – and are nearly ready to transplant organs. But while the technology’s possibilities are exciting, already there are fears we could be ‘playing God’. Read more...
Holler Box